Impressions from around our research aquarium...

showing the infrastructure and research activities at various sites within the facility. 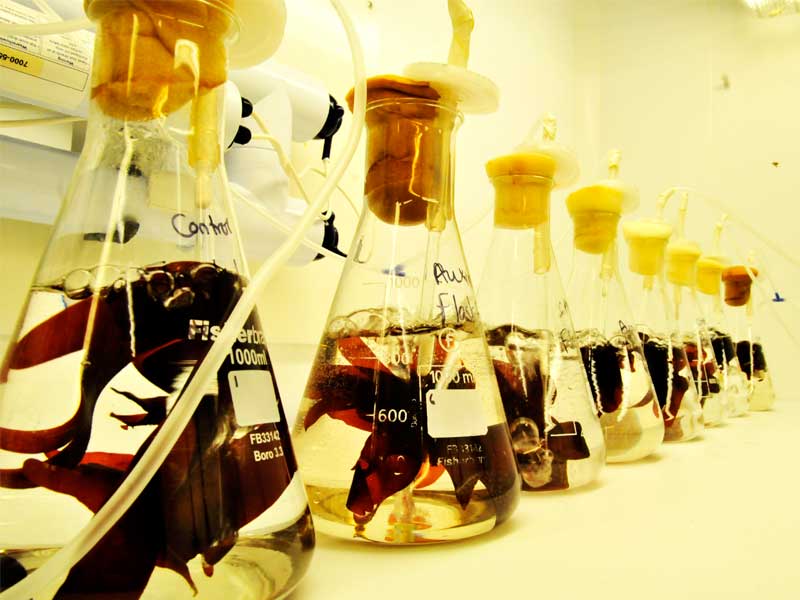 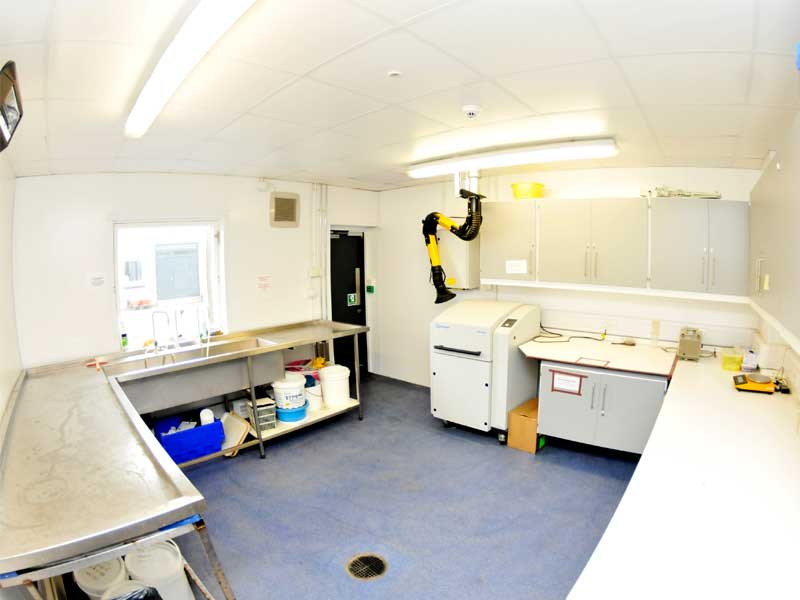 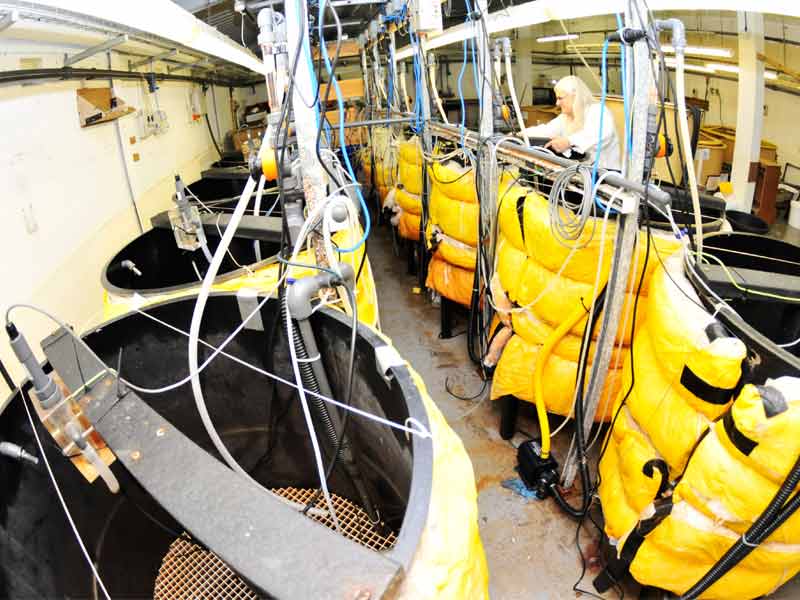 Inside the aquarium annex 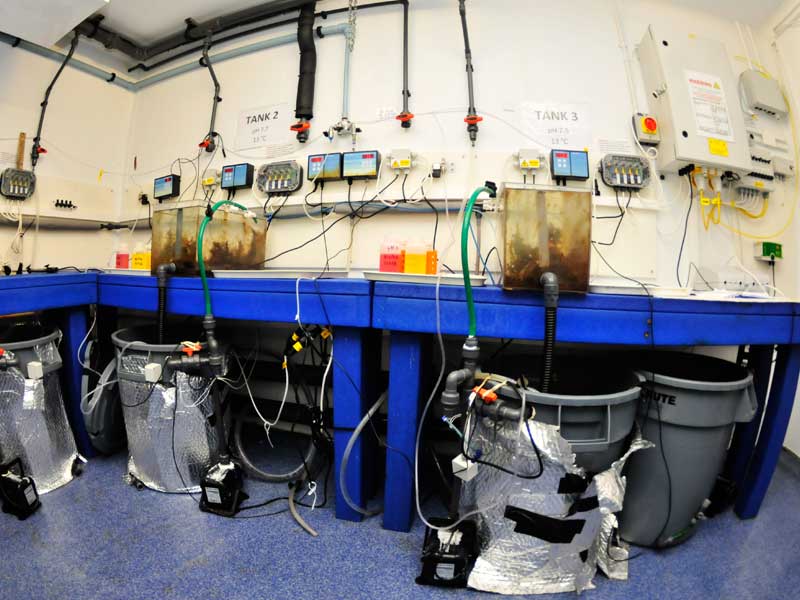 The flexible layout of the aquarium allows for bespoke experimental setups 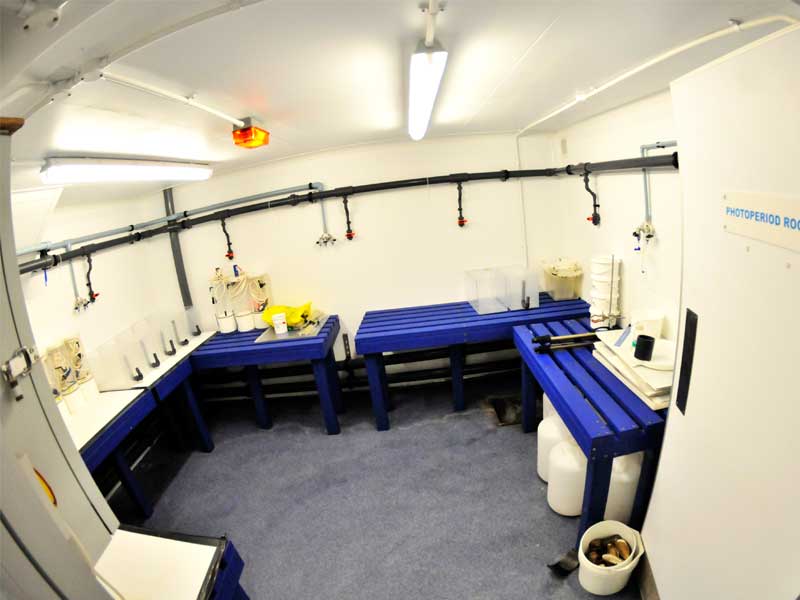 The aquarium has several photoperiod rooms. 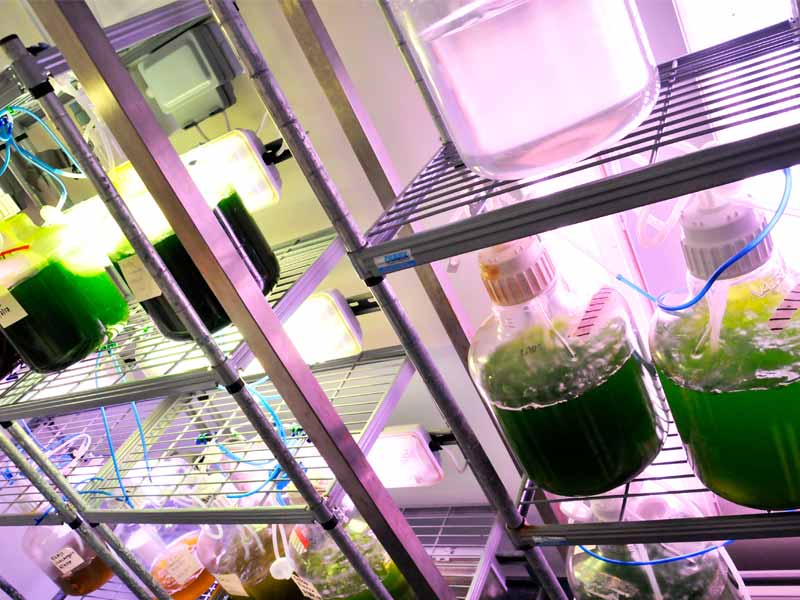 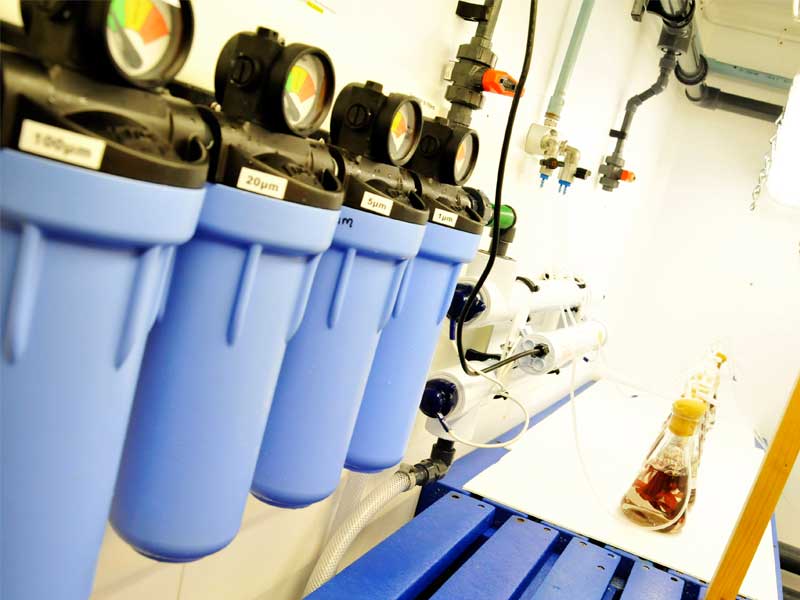 The quality of the water supply is well controlled 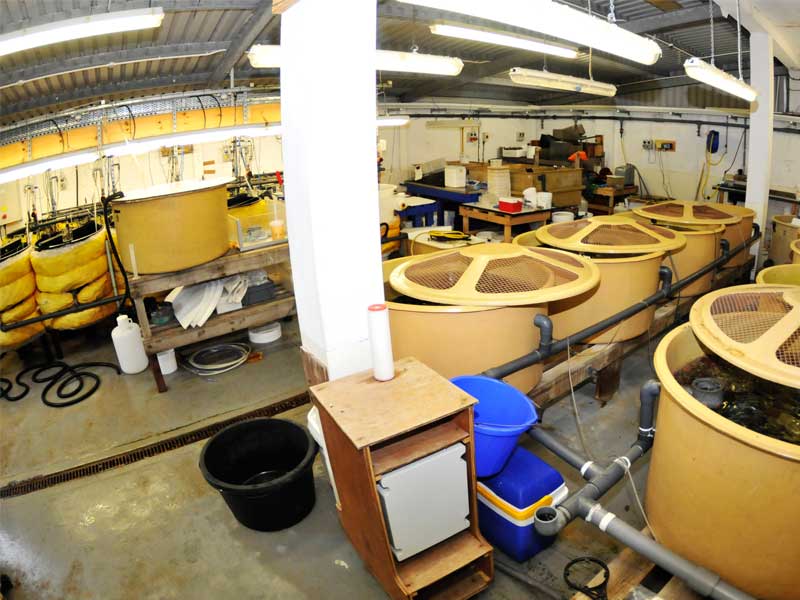 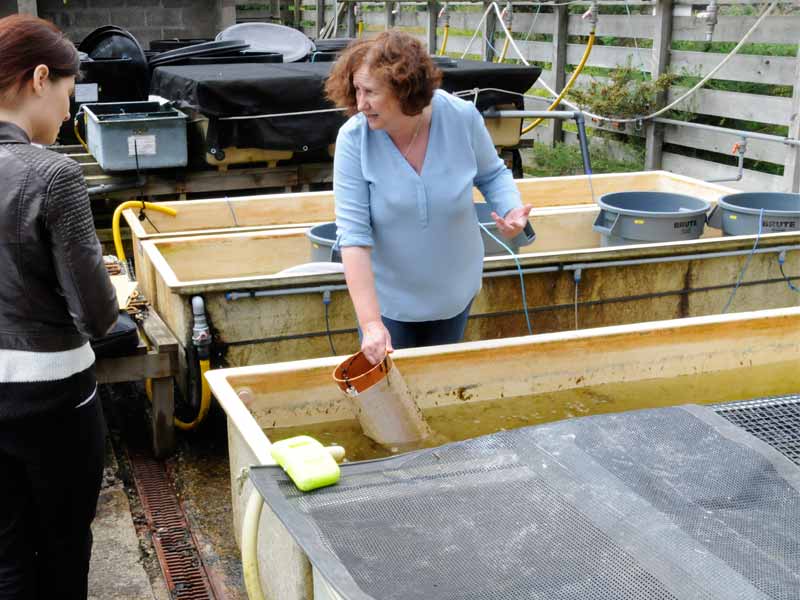 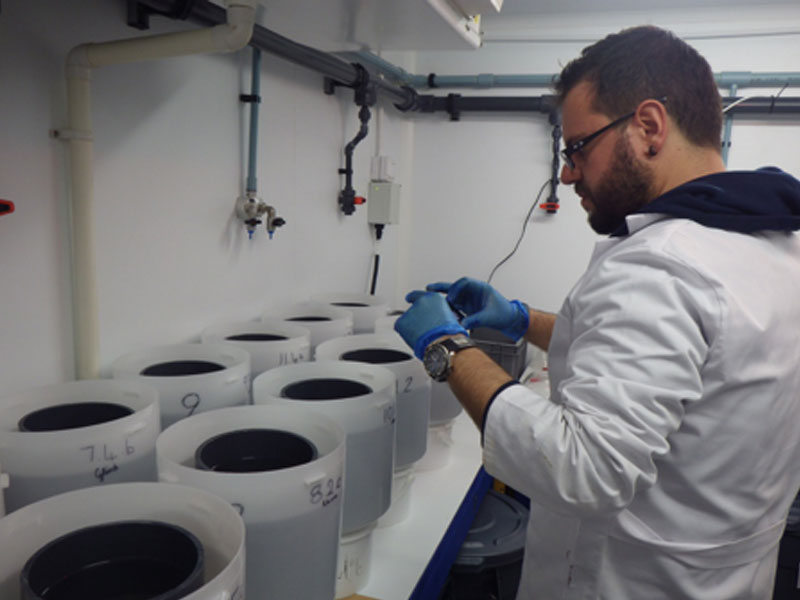 The aquarium is regularly used by postgraduate research students 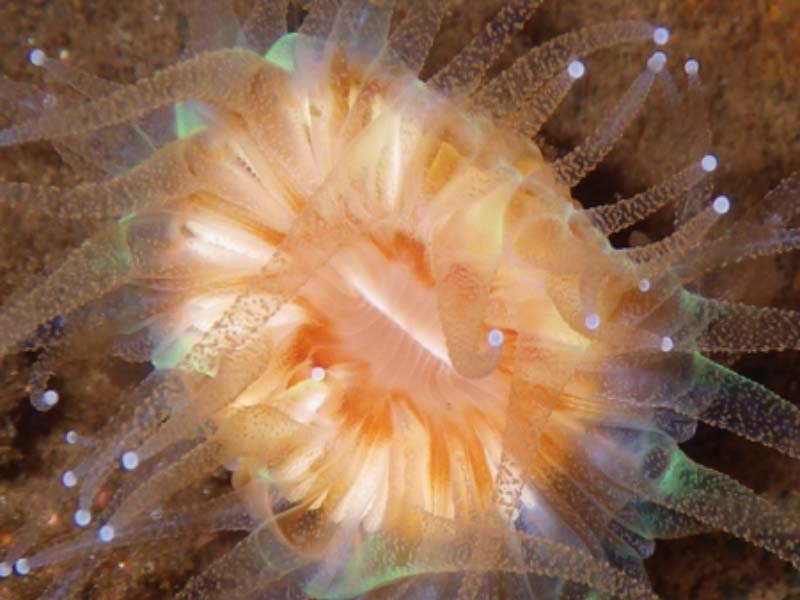 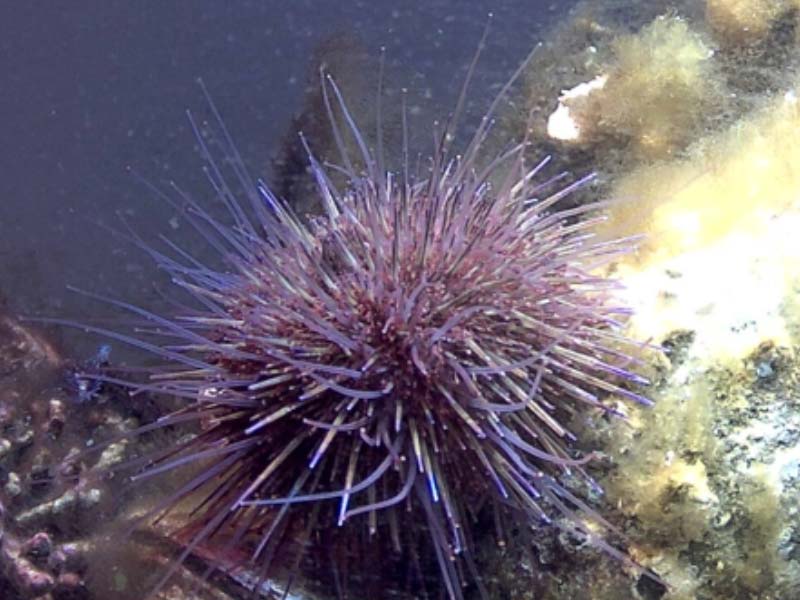 SAMS has a long history of growing sea urchins 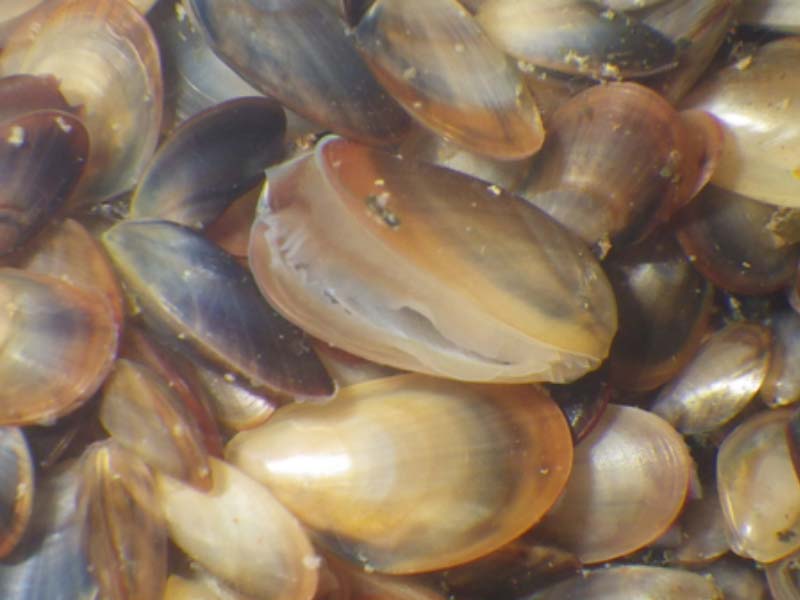 Studying the response of mussels to various pollutants in the aquarium 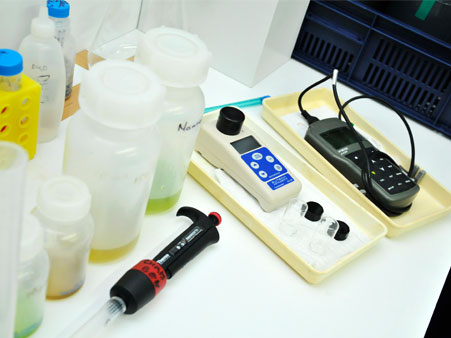 Basic analytical equipment is routinely available in the aquarium laboratory. 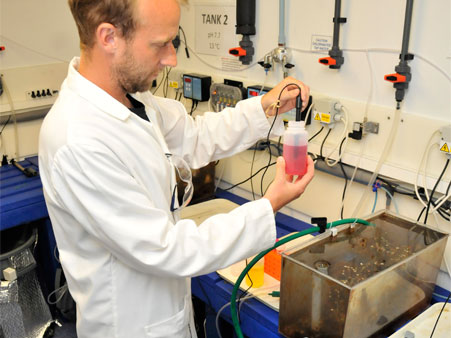 The aquarium also hosts visiting students and scientists as well as commercial users. 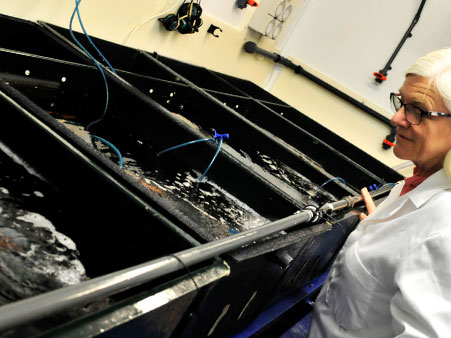 The Alan Ansell research aquarium supports scientists and students from SAMS and around the world as well as commercial clients in research, teaching and development projects.

It extends over 160m2 and consists of indoor and outdoor facilities.

The indoor facilities include an open plan experimental area, a mezzanine floor with a communications room, communal areas and numerous photoperiod and constant temperature rooms whilst outside an area holds raceways and tanks.

An in-house multi-skilled technical support team is available to assist in the design, development, setting up and running of bespoke experimental systems to conduct aquaculture or marine ecology related research projects.

The aquarium has been used for studies of various topics including the biology of deep-sea coral, biological rhythms, echinoculture, feeding trials, seaweed cultivation, impacts of excessive sedimentation from dredging, larval development, behavioural studies, and the biology of non-native species.

Our seawater supply is from the Lynn of Lorne and pumped via sub sand filter intakes. The system is duplicated with the capacity for crossover in supply to increase reliability. The main Aquarium supply, comprising a large (44m3) settlement tank, a supply tank and a variable speed pump, is duplicated and provides a flow-through seawater system which is operated on a partial recirculation system.  This system is computer controlled. The adjacent Annex supply is also sand filtered. The outdoor Aquaculture area and algal hatchery is supplied via a header tank and sand filter. Water quality (pH, DO, conductivity and temperature) is monitored at both sites.

The main aquarium consists of 40 m2 open plan experimental floor area, with a variety of tanks (including 9 paddle resuspension tanks) for stock keeping or experimental work, and a number of associated rooms.

Available in all areas

The main aquarium has five constant temperature (CT) rooms and four photoperiod (PP) rooms with different combinations of the following:

A selection of tanks and pipework

Specimen reception with wet area and large sink for receiving and preparation of collected material and dry area with bench top and dedicated storage for related experimental equipment.

Communications room for remote camera and monitoring observations. A quiet and comfortable observation room with ample work top space allows experimenters to collect and analyse data remotely, and to observe behaviour without disturbing the animals.

For more complex analysis, we can access other analytical facilities at SAMS with advanced instrumentation. Liquid Nitrogen, and -20oC and -80oC storage can also be arranged.

This site is being partially re-developed for use in the growing macro-algal culture sector. There are two wet rooms. One is being fitted out as an algal hatchery

The outside area holds six raceway tanks and some stock holding tanks. The 14 x 200L round tanks and a number of rectangular tanks are a useful area for natural weather conditions. 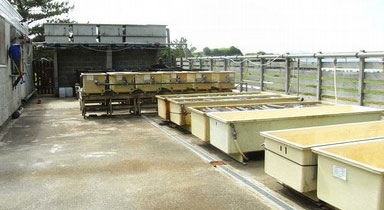 Who was Alan Ansell? 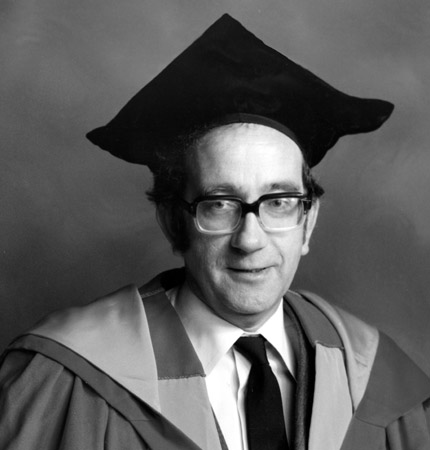 The aquarium is named after the late Dr Alan Ansell (1934-1999) who had spent most his professional life at the Association studying bivalves and other animals on the shores around the world and in the 'old' aquarium at the Institute. The refurbished aquarium was opened by his widow, Joyce, on 20 October 2008.

Lloyd Peck from the British Antarctic Survey summarised Alan's life in this obituary:

"Despite all of the fine accomplishments in his career, being an excellent scientist with a humble demeanour, possibly his greatest attribute was enthusiasm."

For many years Alan Ansell was to the fore of research in molluscan ecology and physiology, with a publication record which spanned five decades.

After graduating from Reading University in Zoology in 1956 his research career began with a PhD at Glasgow and then post-doctoral studies on Venus at Southampton, assessing the benefits of growing them in the heated effluent from Fawley power station. In the early 1960s Alan moved back to Scotland with a position at the Millport marine station, and then moved to the Scottish Marine Biological Association (now SAMS) at Oban in 1969, where he stayed until his death.

In the 1960s and 1970s Alan Ansell produced seminal molluscan papers on behaviour, metabolism, biochemical composition, growth rates, circulation, temperature tolerances, population energy flows, and many other subjects. He was especially fond of Donax, on which he wrote a major review in 1983. In more recent years he worked extensively on interactions between fish predators and bivalve populations, and focussed on siphon regeneration. He had also recently carried out a video study of echiuran worms. And I will never forget his description of the explosive nature of their defaecation cycle. He published nearly 200 papers, was an honorary lecturer at the University of Stirling and was awarded a DSc by Glasgow University in 1981. After retiring in 1994 Alan continued his active participation in science. He was managing editor of Oceanography and Marine Biology Annual Reviews. When he died Alan had published a paper the previous month in the Journal of Molluscan Studies on recovery from siphon damage in Donax vittaltus. He also had two more papers in press and more close to submission on burrowing rates in Antarctic bivalves and anemones.

Alan’s technical capacity was also great, embracing calorimetry, cinematographic and video analysis, and biochemistry, as well as being one of the first biologists to use a physiograph in the study of pressure cycles in burrowing and boring bivalves. He also conducted significant work on crustaceans, fish and brachiopods, but his main love was for bivalve molluscs.

Alan will be remembered dearly by his many students, for he was a conscientious and gifted supervisor who always made time and was good at gauging when a student needed leading and when they needed pointing in the right direction. His collaborators and colleagues will miss him too, for his great efforts and detailed contributions. Alan had an understated way of working, was quick to see the good in others and their work and usually met life with a twinkle in his eye and a smile on his lips.

Despite all of the fine accomplishments in his career, being an excellent scientist with a humble demeanour, possibly his greatest attribute was enthusiasm. His thirst for understanding took him to many places around the world from Oman to Chile, India to Venezuela and South Africa to Brazil. Alan was most at home on a seashore. He had the true curiosity and enthusiasm of youth for the animals living there, and this stayed with him throughout his life. He especially enjoyed working in the malacological workshops in Hong Kong and had strong links with New Zealand and France, having supervised and examined students for French colleagues and published joint papers with many authors from Brittany.

At home Alan had a wide circle of friends, and he was well liked in the Oban community. He was a keen gardener as the surroundings of his house on Ardconnel Hill attest. In this area too Alan had successes. He was president of the Oban and Lorne Horticultural Society, he judged at local shows, and won prizes for his rhododendrons and azaleas. Above all else Alan placed his family. He was proud and pleased that his two children had become successful in their own right in Portsmouth and New Zealand. Both he and Joyce shared immense pleasure in their grandchildren.

Alan finally succumbed to cancer after a struggle which characterised the way he had lived throughout his life. He continued to work from his computer at home when he could not get in to the laboratory. His sense of humour stayed to the fore, and in his discussions with me it was apparent that his caring for other people and his passion for science was still as bright as ever.

I, amongst others, will miss a fine intellect, a high quality scientist, a gentle friend, and above all a genuinely fine human being.